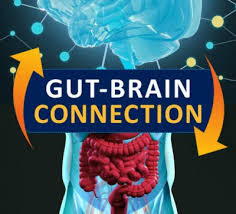 Ever wonder why so many people are experiencing digestive issues like stomach bloating, constipation, diarrhea, and leaky gut? Or how about the number of people with brain fog, moodiness, anxiety and depression, ADD, ADHD, Autism, Alzheimer’s and Parkinson’s? Digestive disorders and Neurological disorders – all showing up in the same person. Hmmm…..could they be related and what could be the cause?

These are all symptoms of inflammation…

Did you know our gut and our brain talk to one another? The studies and the data show that they do. They are connected by the vagus nerve. It is one of the longest nerves in the body – starting at our brain stem going all the way down into our gut and it also has direct access to our organs. So there is a lot of communication going back and forth between these two.

Case in point – Have you ever felt fearful of a situation and then all of a sudden have to go to the bathroom? Or see a piece of chocolate and start to salivate. You start preparing your gastrointestinal system for this piece of chocolate and you started this process with your eyes! Are you beginning to see the connection?

When your microbiome, your gut bacteria, gets what it needs it sends positive messages to the brain and significant changes happen in both places. A good example of this was a study done on autistic children. They changed their diets and one of the things they fed them were fruits and vegetables that were colorful. They began to see them calming down – there had been a shift in their behavior. This is huge! Their microbiome was getting what it needed.

As most of you know I am all about “Count the Chemicals not the Calories”. The bottom line? We have to get serious about this – if we want to live a long and healthy life free of disease, pain, and limitation.

Unfortunately, glysophate is prevalent in our food supply today. It is a powerful toxin used to kill weeds. Three of our staple crops – corn, soybeans, and sugar beets have all been genetically modified and they cover 80% of our farm fields. All of these crops are sprayed with glysophate so when we ingest them we are ingesting the toxin too! There are so many other chemicals that oddly enough will appear on an ingredient list that we need to be on the lookout for – food dyes, caramel color, natural flavors, etc. There are many with long names that we can’t even pronounce. “Code” words for MSG, flavor enhancers, preservatives, emulsifiers, just to name a few.

So what can we do about it?

Doing your best to eat organically, not be exposed to complex food chemicals that usually come in processed food, stay away from areas that have just been sprayed with pesticides and then also do a detoxification protocol. Do a 28 day detoxification so you get the toxins out of your system as well as decreasing exposure going forward.

I want to share with you some statistics that may help bring my message home.

** those one in two and one in three will be severe enough that they show up at a physician’s office and need drug management.

Today, one in seven younger people complain of memory problems (brain fog). One in six adults is on, or has used some kind of psychiatric medication. If you make it to the age of 85, you have a 50% chance of being diagnosed with Alzheimer’s disease. I mean these statistics are staggering!

Everything that we put on the end of our fork is information for our body and determines just how healthy we
will be.