HEAL – the word of the day 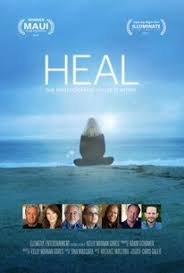 ​I just got done watching the movie Heal on Netflix for the 2nd time. So powerful and so appropriate for our current times whether we are suffering physically or emotionally. They share stories from spiritual leaders, physicians, and those with chronic illnesses revealing the powerful connection between the human psyche and physical health.
What we think, believe, and visualize about our situation can have such an impact on our ability to heal. Case in point – a gentleman in the film had been in a horrific accident. Four to five of his vertebrae had been compressed. He was told he would need surgery – a rod inserted in his spine separating his vertebrae with a long recovery or he may be paralyzed for life, there were no guarantees. He didn’t feel comfortable with any of it and opted out of surgery. Instead, he lay flat on his back visualizing his vertebrae separating on their own and his spine getting stronger and stronger. In 3 to 4 months he got up out of bed and has had a full recovery. Healthy as can be.
Another had stage 4 colon cancer and within the first month of treatment was cancer-free. She had sought the help of a spiritual advisor. Another trial was done with a group of 200 people. I have forgotten their disease but that is irrelevant – here’s what matters -100 of them were given a drug to help them recover and the other 100 were given a placebo. What is so amazing is that in both groups there was a 75% recovery. Because the placebo group believed they were getting their “medicine”, psychologically they believed they would get well.
These are just a few examples of what you’ll see in Heal. The power of the mind, our thoughts and beliefs to heal our body cannot be denied. I really hope you will take the time to watch the movie. It’s on Netflix and it’s about 1 hr. 45 minutes – worth every minute.